Whether it’s activities in the water, snow or at home – exercise is a great way to boost your health and feel better. A wide range of assistive technology also makes this an option for people with physical disabilities or mild dementia. Some of these tools allow users to enjoy sports in spectacular, beautiful backdrops – in both winter and summer.

Skiing is also something for inexperienced novice skiers: You can sit in the front seat and let a person without a disability steer the skis.

Whether you are an experienced skier or a rookie: skiing is fun for everyone. Tessier, the French manufacturer of outdoor adaptive sports equipment is living proof of that. The company offers a wide variety of products that enable people with disabilities to have an active skiing vacation: "We have a full range of alpine ski equipment designed for people with all kinds of disabilities to (re)discover the mountains," says Richard Roul, technical sales manager at Tessier. The company’s products include the Solo product line with different uniski models, and the Ski Duo products for less experienced skiers.

Explore the mountains with the mono ski

But first, here is something to delight experienced skiers who are able to independently shred the slopes: You can really let loose with the Solo models. A specially designed seat is mounted on either one or two skis and you are ready to go. Seat and ski can be adjusted to tailor the device to the skier’s skill level, allowing both relaxed fun and speed skiing. The Scarver accommodates high speeds and precision, which is why it is the sit ski of choice for Paralympic athletes to help them win medals.

If you are not quite at a professional skiing level yet but still want to get to the summit, you might want to explore the Duo products. Users sit in a bucket seat, which is mounted on skis. In this case, a second person stands behind the seat on the ski and pilots the movement. To allow for better handling and steering, the seated person’s center of gravity is not as low as in the Solo models. While this may not let you break any speed records, it still enables all parties to thoroughly enjoy the mountain scenery. 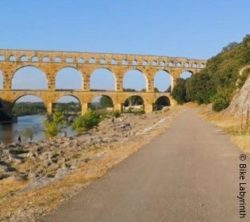 When the weather is grey and wet, Bike Labyrinth is a great way to escape to the sun – for example, to France's Pont du Gard.

Bike tours for people with dementia

The Dutch company Bike Labyrinth has a pleasant change of scenery in store for all those who don’t want to or are unable to step outside their door. As the company name suggests, its products highlight bicycling. But the entrepreneurs thought it too boring to just have people exercise on their indoor bike trainers, which is why they got creative.

The fact that you get to see places is what makes cycling so much fun. That prompted the inventors to tape virtual bike rides for indoor bike trainers. The setup is as easy as can be: A screen is mounted in front of a home trainer or exercise bike, allowing users to embark on virtual bike tours on any route of their choice as soon as they move the pedals.

Let the virtual bike tour begin – users can cycle German cities, bike along French coasts, or ride past Dutch windmills. Bike Labyrinth offers tours that vary in length. You can choose simple predetermined routes or opt for an interactive route that allows you to choose a direction at certain junctions – go left or right. Destinations in Europe aren’t the only choices: the company also offers routes in North and South America, Australia, Japan or Indonesia, to name just a few. And Bike Labyrinth continues to expand its options – destinations in Turkey are next on the agenda.

These bikes tours are especially suited for people with mild dementia. The wide array of routes allows them to bike around cities they may have visited in the past. The company reports that some users have already made cognitive improvements thanks to this tool. The idea was sparked as a project at the Leiden University but by now, the company often sells its products to healthcare facilities, retirement homes, and rehabilitation centers. The different routes keep people with dementia entertained while they exercise and get fit at home. 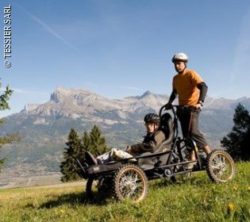 With the tandem wheelchair, mountain panoramas can be explored and mountains can be raced down.

Accessible sports in the summer

Tessier has the right sports equipment for every season but stays true to its roots – the company also offers boards that allow users to have fun in the summer. Technically, it is only one board: namely, a wakeboard. Swaik resembles a snowboard but is designed for water use. The wakeboard is mounted under the seat and users are pulled across the water via a rope. While beginners first need to learn to keep their balance, those with more experience can perform impressive stunts and tricks if they dare.

The developers also kept athletes in mind who are not as fond of the water: "We have developed a downhill tandem wheelchair, which gives users a summer experience they typically only get from riding a chairlift in the winter: views of amazing vistas and a unique mountain panorama," Roul explains. Your partner stands behind the Cimgo wheelchair, steers, brakes, and navigates down the mountains at a fast pace – just the right thing for those with a need for speed. Of course, you can also use the wheelchair at a more moderate pace, allowing you to enjoy the scenery at your leisure.

Well, have we whetted your appetite for a bit of exercise? Whether you prefer winter or summer: your favorite season is just around the corner and with it comes your chance to embark on your favorite sport. Or you might prefer to stay inside if the weather is bad and cycle through the incredible landscapes on your screen.