Pro Walk: Overcoming foot drop one step at a time

Safe walking without tripping or falling is challenging for people with foot drop, a muscular weakness that makes it difficult to lift the front part of your foot and toes. Luckily there are technologies that provide active support by using functional electrical stimulation (FES). Pro Walk GmbH delivers these types of foot drop systems. How do these devices allow users to complete everyday tasks? REHACARE.com asked Nico Riedl, Product Manager and Physiotherapist at Pro Walk GmbH. 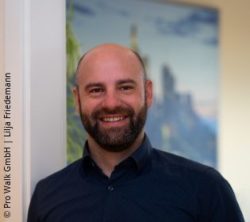 Nico Riedl: We nicknamed NeuGait our "starter talent". This compact and effective device provides successful treatment. The small plastic brace features a soft cuff that is worn under the knee. The sensors record leg and foot movements, which are analyzed by electronic technology. NeuGait sends precisely coordinated electrical signals to the peroneal nerve, which controls the muscles in the leg that lift the ankle and toes upward. The system’s compact size also makes it suitable for children.

WalkAide® 2.0 is our "tech talent". Its modern case houses innovative technology. Sensors record the movement of the leg and continuously synchronize it using a complex algorithm. Armed with sophisticated technology, the intensity of the WalkAide® 2.0 can be controlled via an app as needed. Thanks to its sleek design, the system can also be worn discreetly under your clothes.

Who can wear the different models?

Riedl: The three foot drop systems are suited for anyone suffering from a disruption to the nerves that control foot function but whose nerve conduction is still intact. This might be because of a stroke, multiple sclerosis, incomplete paraplegia, or infantile cerebral palsy. Both functional electrical stimulation systems can be used as long as the nerves still react to applied electrical currents. NeuGait is especially suited for children due to its smaller size. The same applies to the well-tried WalkAide® system. When we developed the WalkAide® 2.0, we gave special attention to its sleek, flat design. User surveys have indicated that this is an important aspect that helps increase daily user rates. Thanks to its sleek dimensions, the system can now be discreetly worn under most clothing.

Whether WalkAide 2.0, WalkAide or NeuGait (from left to right) – the products of the foot drop family from Pro Walk GmbH not only enable safe walking, but also contribute to more mobility and a self-determined life.

Riedl: The peroneal nerve controls the muscles that lift your foot. Injuries to the peroneal nerve due to a stroke, multiple sclerosis, or traumatic brain injury can cause patients to lift their leg higher to compensate for the foot drop and prevent dragging and tripping. That’s why foot drop often results in frequent falls. The three foot drop systems stimulate the nerves and muscles in your leg to lift your foot at exactly the right time, helping you walk safely. The systems adapt to the individual gait patterns since we all walk differently. This also allows users to save their energy. Suddenly they have the stamina to walk long distances again, which greatly promotes independent living. Another benefit is that the systems require no restricting bandages as users walk in their own shoes. There is also no muscle loss. Muscles stay healthy and strong because they are being used again. This prevents muscle and bone loss. The goal of this product family is an overall enhancement of mobility options for users to allow them to live a safe and self-determined life as much as possible.

Riedl: Inclusion to us means the participation of people in everyday life regardless of any minor or severe limitations. Our assistive technology aims to restore a piece of normality and promote active participation. Our foot drop systems strive to help people with foot drop to walk painlessly and safely and minimize the risk of falls and injury. This leads to more independence, makes daily living tasks easier, and subsequently enables unrestricted social participation.

Whether it's new products or exciting field reports – in our WE ASKED column, we let you in on the action. REHACARE.com talks to established companies and start-ups about current topics and trends from the industry – all about auxiliary means and a self-determined life.
Click here to read all interviews