"Suse" helps abused and battered women and girls with disabilities 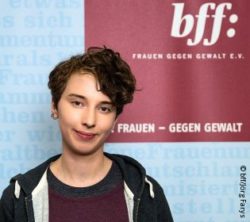 REHACARE.com spoke with Anna Hartmann of the German Association of Women’s Counseling and Rape Crisis Centers BFF (Bundesverband Frauenberatungsstellen und Frauennotrufe). She is one of the persons in charge of the "Suse – Safe and Self-Determined. Empowering Women and Girls with Disabilities" Project.

Ms. Hartmann, how much are women with disabilities exposed to violence?

Anna Hartmann: Women and girls with disabilities are very frequently subjected to violence. For a long time, this subject was taboo. At this point, however, representative studies show that approximately every second woman with a disability experiences sexual violence during her childhood, adolescence or adulthood. Every seventh woman without a disability experiences severe sexual violence at least once in her lifetime. Women with disabilities experience physical and psychological abuse, for instance in the form of name-calling, threats or insults nearly twice as often as women without disabilities.

What types of abuse do women with disabilities generally experience?

Anna Hartmann: Women and girls with disabilities are subjected to abuse because they are women and because they have a disability. Gender-specific abuse takes many different forms: it includes sexual abuse and assaults, domestic violence or psychological abuse. Women with disabilities also experience manipulation and discrimination more often than non-disabled women. Their general living conditions frequently differ from those of non-disabled women. Care dependency or life in a disabled care facility can be risk factors non-disabled women are not subjected to. For a long time, these facilities were considered very sheltered places, in which assaults and violence subsequently are assumed not tooccur. This is a false conclusion because many women with disabilities who live in care facilities also mention structural inequality and discrimination. Every fifth woman does not have her own room for example. Oftentimes, toilets and bathrooms can’t be locked which increases the risk of assaults. Another problem is that women and girls with disabilities rarely seek counseling after they experienced abuse since access to a supporting system is difficult.

How do you support women with disabilities with the "Suse" Project and what can affected women do on their own?

Anna Hartmann: "Suse" is a project by the GermanAssociation of Women’s Counseling and Rape Crisis Centers (bff). It aims at empowering and informing women and girls with disabilities. "Suse" is intended to make it easier for abused and battered women and girls with disabilities to obtain support. The primary goal is to establish better networking between all of the stakeholders in the areas of disability care, anti-abuse and self-determination associations. All too often, disability care facilities lack knowledge about the dynamics of abuse and what can be done to prevent violence. Resource centers sometimes lack disability specific knowledge. To ensure good support, all of the local stakeholders need to be aware of each other so relief can seamlessly take place. Having said that, the affected persons themselves also need to be aware that they can take advantage of the services of women’s counseling centers and where they can find help.

To establish local inclusive networks against abuse, the project has five model regions in four German states. Here long-term and binding cooperative efforts are meant to be established. An online platform (www.suse-hilft.de) was also developed within the scope of the "Suse" Project. It provides an easily accessible way for women to find local centers. The platform also includes a variety of information sources about the types of violence, in part in Easy English and German Sign Language. Recently, the first inclusive and accessible campaign "Superheroine against Abuse" was launched. In several languages - among them also Easy English and signing by a sign language interpreter - an animated short film explains what counseling means and where battered and abused women and girls can find support close-by.

Anna Hartmann: On a small scale, it might mean that I am able to work in a team with my colleague who also has a disability because our office is wheelchair accessible. On a large scale, it’s also important that all people are granted access to rights and assistance. The implementation of the UN Convention on the Rights of Persons with Disabilities in Germany would be a big step in finally acknowledging the rights of persons with disabilities, and particularly also the rights of battered and abused women and girls with disabilities. Having said that, inclusion should not just be viewed as a pure responsibility of the government. It is also essential to change the structures of the social majority on several levels.

More about the bff at: www.frauen-gegen-gewalt.de