Microsoft has led the way and launched an adaptive controller to enable people with physical disabilities to have nearly the same complete gaming experience as people without disabilities. Mattheaus Drory achieved a similar result. In this interview with REHACARE.com, he admits that he initially didn’t necessarily have people with disabilities in mind when he developed his one-handed keyboard. 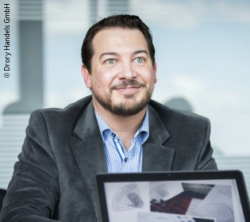 Worked on his one-handed keyboard for three years: Matthaeus Drory.

Three years of experimenting resulted in a production-ready keyboard that can be operated with either the left or the right hand, but always requires the use of just a single hand. Starting in November 2018, the first 1,000 pieces are available for 160 €.

Mr. Drory, how did you come up with the idea for a one-handed keyboard?

Mattheaus Drory: I believe the best ideas are the result of personal needs and challenges. I've been using computers since childhood and was never truly satisfied with the latest available standard keyboards. When I started working on a solution three years ago, I met people with physical disabilities of the arm and hands. The large number of people affected by this is alarming. This realization prompted me to make TiPY my top priority. There is a great demand for a new well-thought-out concept that truly provides a complete input device solution.

What are the advantages of TiPY for users?

Drory: TiPY can do everything a standard keyboard can, plus much more but is designed to be operated using only one hand. Whether you write texts, make formatting changes and edit charts or use keyboard shortcuts - TiPY lets you do all that with just one hand.

There are physical limitations as far as typing speed is concerned. You can only press one key at a time. TiPY is designed to accomplish the same things with one hand as you can with a standard two-handed keyboard. And yes, it totally works.

TiPY enables you to type and control the mouse at the same time, as well as use other optional devices, such as digital pens or other digital input devices for example. Previous standard keyboards forced you to repeatedly take your hand off the keyboard, which makes you lose time during all steps.

What’s more, TiPY is also the first keyboard that can be used with either your left or your right hand.

TiPY can do everything a standard keyboard can do and even more. But the highlight of it is quite clear that the invention of Drory can be operated with only one hand.

Did you collaborate with people with disabilities during the TiPY development phase, or did you get test feedback from this group prior to the keyboard’s launch in November?

Drory: Yes, I have. Having said that, TiPY is first and foremost a one-handed keyboard. Regardless of whether it is used by a person who is able to use both hands, a person who has had a stroke or has a physical disability, or someone who might only be able to temporarily use the keyboard with one hand because of a broken arm - the use, challenges and benefits of this type of keyboard are always the same and TiPY is a solution for all of these needs.

TiPY has been extensively tested and has already been introduced to a wider audience. TiPY was awarded and honored by the Austrian Disability Council during the annual UNIKATE Awards. I have also already received excellent feedback for TiPY at various trade fairs. The REHACARE trade fair is also on our agenda next year.

Drory: Unfortunately, the term inclusion also implies exclusion. This is not supposed to be the case and I was oblivious to this fact prior to my research for TiPY and meetings with the Austrian Disability Council. Unfortunately, you often only become aware of things if you are exposed to them. Communication is a key issue here. An accessible workplace, living and communicating through computers can help to improve inclusion. Thanks to digitization, there are many amazing opportunities for people with physical disabilities to participate in the workforce or in everyday life. TiPY can help - after all, the computer is the greatest tool of our times.

More about TiPY keyboard at: www.tipykeyboard.com